A Personal Reflection from Rachel Swan 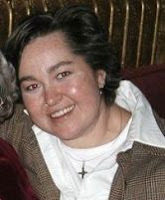 The news came in on an already favorite day, St. Patrick's Day. We could now call her Bishop Elect Mary Glasspool.


Let me start by saying I am not a cradle Episcopalian. As a matter of fact, I came to the Episcopal Church the Monday after Easter in 2003, just 3 months before the 9000+ people making up the General Convention of the Episcopal Church would descend into Minneapolis. I am from Minnesota--born and raised--so its perhaps without much shock to you that my immediate faith background was Lutheran. My recent past with the ELCA at that point was a bit, well rocky; so much so that I had sworn off the idea that I could ever be a part of the Body of Christ again. I had sworn off being a part of an institution that preached about God's love, then after worship, glad handing the exiting congregation, would refer to my partner as the wrong gender (he, his and him) and refuse to reach out and shake our hands. No thank you God, I'll pass on that version of love.


Its been said that God has quite a sense of humor--and my journey back to the church, the faith, is no exception to this saying. Never say never, right?


So it was that God would call me back into ministry, this time working for the Episcopal church. Who were these people, and what did they believe about people like me? Would I be stopped from working with young people as I had been stopped before? What would happen if they found out I was in a relationship with a person of the same gender as me?

In late July 2003 the lens of the whole religious world came into focus on my little town, looking at what the Spirit was doing amongst the gathered in Minneapolis. CNN, CBS, all the big networks were covering the story: would an openly homosexual man be elected Bishop of the Diocese of New Hampshire? We learned at the end of those hot summer days that yes, yes he would. I had come a ways since feeling like modern day leper in God's church.

This week I have spent a lot of time thinking about what it felt like in 2003--newly Episcopalian. I have wondered about all those people hearing this news, and finding themselves in the story of Bishop Elect Glasspool. Women who are not allowed to serve at the altar in their own faith traditions, LGBT people who have only known being called sin and sickness, not love and gift. I think about all of the upcoming Mary and Gene's--those who are called to serve in God's church, in ways we have not yet to begin to imagine. Who is hearing this news and thinking to themselves "perhaps I can too?" Only God knows.


Some call what has been happening a fracture. I agree. It has been a breaking open, an irreversible crack. A further breaking open in the Body of Christ that perhaps when Jesus said take this, all of you, perhaps all truly does mean ALL. I believe we still have a ways to go, however I cannot ignore this clear and visible sign of God's wild, messy, unsuspecting, outcast including, upside-down inclusive love, faith and trust in people like Bishop Robinson, Bishop Elect Glasspool, and even someone like me.


This week I remembered again God's crazy sense of humor whispered to me that day in 2003, and again this week, THY will be done, on earth as it is in heaven. Amen.


Rachel Swan is a volunteer for IntegrityUSA and was a member of the communications team for General Convention in Anaheim California. She and her partner live in Minneapolis, MN. Rachel can be found blogging at The Sweet Bi and Bi and The Swandive.

Posted by Integrity USA at 4:27 PM