Pride and Shame in the Anglican Communion. 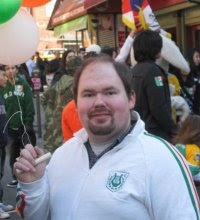 I remember when Bishop Robinson received the consent to be bishop at General Convention. I was studying abroad with about two dozen or so students from my college at Corpus Christi College in Oxford. I had followed the newsfeeds through the whole debate at convention, sharing the news with the others, most of whom were Presbyterian (PCUSA) and though sympathetic to my hopes, did not have a dog in the fight. Still they joined me for a pint at one of the pubs to toast what would be one of the first pivotal moments for GLBT Christians in the 21st century. After the pint, we went to evensong at Christ Church Cathedral, and later spoke with some of the clergy who told us how proud they were for the Anglican Church, especially in light of what had happened with Jeffery John just months before. It was a day to be proud to be an Episcopalian and an Anglican, and a newbie openly gay person.

I had heard that this would cause the Church to split—that the Communion would crumble, and I watched for the signs of it. I read of the grumblings of more traditional Anglicans—many of which joined voices with other splinter groups that had left well before Robinson was called to be bishop. I also heard the positive voices and Alleluias from the progressive Anglicans who were taking ownership of this time for the achievement that it was in reclaiming our place at the Table.


As the consecration played out, and the Lambeth Commission was called to review what had happened in the Church, we saw people coming in who had felt disenfranchised and unwanted. We also saw many so obsessed with this one issue leave, and the start of many more battles over property and the very soul of the Church. I was blessed to meet the members of the Lambeth Commission while working at Kanuga. I overheard their conversations as I served them food and drink while they stayed there, and I observed their devotion as they prayed at the Chapel of the Transfiguration each day. I also remember the results of their recommendation in the form of the Windsor Report.


I read the report, and many commentaries trying to explain what it meant, and what the implications of the report were for the GLBT members in the Anglican Communion as well as those traditionalists that felt disenfranchised. I felt shame. The GLBT clergy had begun to “come out” and the greater Communion family just did not want to hear it—they did not want to accept that there was a Gay Son among the Bishops, and they sure as hell did not want any more.


Just like a family, some shunned our new bishop, some accepted, some disowned, and some celebrated. More importantly, some tried to reconcile and to educate on why the family needs to accept. There were family members like those involved in Integrity and CFLAG that knew that our Communion-wide need to accept it’s GLBT sons and daughters was important beyond pious notions of what is a sin or not a sin. It was about restoring life to the outcast and unwanted—saving lives and restoring lives—healing the broken hearted—and strengthening the strained “bonds of affection”.


In Columbus we saw the election of the first female Primate in the Anglican Communion—proof of how the need and push for acceptance and equality shows progress in momentous achievements like that. We also saw one of the more ghastly calls for restraint that made no one happy with regards to the still outcast GLBT members of the Church. It is hard to celebrate the achievements of an oppressed sexual minority with the shadow of continued oppression of another minority.


It was at that point that I joined Integrity. I wanted to join the fight that celebrated the achievements of women in the Church and said “And ALSO now GLBT!” The first hurdle was to deal with the restraints that were asked and later confirmed in New Orleans. One of the most disturbing images of these restraints was our new Presiding Bishop’s image of a Lenten fast on continued consecrations. I had had always heard of the fast as giving up something that was bad for you and taking on something good for the world. That sure did not seem like the case with regards to GLBT Episcopalians.


In Anaheim, we moved forward, pushed by Integrity and the many, many allies that also saw this restraint as antithetical to what it means to be a Christian family—another day to be proud to be an Episcopalian. The legislation that was passed was eyed by the patriarch of the family suspiciously… some of our more distant cousins wished to disown us even further claiming that we had gone our own way to ruin. We had whole dioceses vote to disassociate themselves with the Church, often supported by our cousin provinces.


This week we saw yet another momentous day for GLBT Episcopalians—one that will surely continue to rock the boat—in the consent to the election of Mary Glasspool . Again, it happens legally under the cannons of the Episcopal Church that were strengthened by the legislation in Anaheim last year. Again, it has caused the head patriarch of the family to eye us with suspicion. And Again I am proud—but this time I have a huge amount of Shame.


The shame has nothing to do with the great news of LA, but with the disturbing response of Archbishop Rowan Williams. I do not presume to understand what it is like to be a titular head of a denomination so vastly spread across the world, socio-economic strata, and political and theological spectrums. What I do not hear is the same response at words of hatred against us his GLBT members, or the continued efforts of foreign provinces to usurp property in the Episcopal Church. Most deeply ashamed am I of his restrained responses towards the near holocaust-level hatred that is fueling the “Kill Gays Bill” in Uganda.


One of the signs of the Spirit moving in the Church is that this consent comes on the heels of statements of inclusion and support from a Patriarch so wise that non-believes will turn to listen to him, Archbishop Desmond Tutu. He is like that wise old family member that knows that the love of the God and the true bonds of affection that bind a family together are stronger than sexuality or morality. He understands that it is crucial to our faith to accept GLBT Christians into the fold and to celebrate with Easter joy when one like Mary Glasspool is called to be a Bishop among us. He warns us of the demoralizing and demonic destruction that awaits those who shun the outcast, hate those who differ, and seek legislation to exterminate that which we do not want to understand.


I only wish Archbishop Williams would listen to Archbishop Tutu and realize that we too are God’s loved children, that we too are called by the Spirit to serve and lead the Church, and that we deserve to solemnize our love in the Church’s sacraments. Williams, it seems, does not see this, Uganda does not want to see this…and that should make us all ashamed and outraged.


Tutu sees this—Los Angeles sees this—and those that consented to Mary Glasspool’s election see this, and that should make us all proud and filled with an Easter joy.

Posted by Integrity USA at 8:45 PM

While it is disappointing (but not surprising) - this response from the ABC - I am not interested in what anyone outside of TEC thinks. I am reminded of what Bishop Barbara Harris stated in her sermon at the Integrity Eucharist at GC2009 in which she was quite frank:

"And, and let me ask, that since we don’t have any say in who gets see-lected as
bishops in some other provinces of the Communion, why should those in other provinces
be able to dictate who can or cannot be ee-lected by the laity and clergy who they will lead in this branch
of Christ’s holy and catholic church?"