In Memory of Margaret "Midge" Costanza
by
The Rev. Canon Albert Ogle 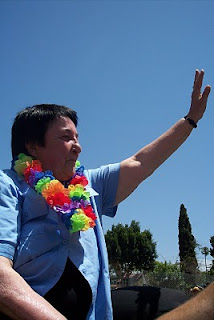 Friday 26th March 1977 was an historic day for every LGBT American. It was the first time LGBT people were invited to the White House. Literally, we were invited to “sit at the table” with the elected leadership of this country. This momentous occasion marked the end of the first decade of the gay liberation movement begun by the Stonewall uprising of 1969. We owed this breakthrough to one person: Midge Costanza who died on March 23rd in San Diego. She was my neighbor and my friend. 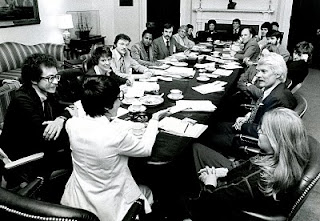 She often talked about her life as a special aide to President Carter. He called her his “window from the White House” to make government more accessible to women, communities of color, the LGBT community, workers and the marginalized. Midge invited all of us to the table. The dignity and place of gay, lesbian, bisexual and transgendered Americans was to change forever after Midge called the first meeting of 14 representatives of the gay community to the White House thirty three years ago.

Together with Jean O’Leary and others, Midge not only created a plank in the Democratic Party’s platform that included LGBT people for the first time, but she was the catalyst to begin the process of reconciliation of millions of Americans with their gay family members and colleagues. Her actions brought dignity, and affirmation and recognition of LGBT people as full citizens of this great nation. It took the courage and conviction of a great American leader in Midge Costanza to initiate this conversation. And while LGBT issues are still controversial some forty years hence, we have come a long way from those early days and we cannot forget the brave shoulders we now stand upon.


This nation owes Midge a great debt for making our country more inclusive. The LGBT community has lost a great advocate and visionary who imagined a more equal America, decades before issues of marriage equality, “Don’t Ask Don’t Tell” and the international criminalization of homosexuality surfaced in the public square. May she rest in Peace. We are a better country because of her commitment to diversity and inclusion. A funeral service is being planned in San Diego and a requiem in Rochester New York. Remember her and the great work that has gone before us on March 26th.

Posted by Integrity USA at 3:05 PM