TIME MAGAZINE: Being Gay in Uganda: One Couple's Story 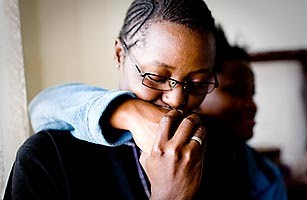 
Pepe Julian Onziema looks great in a suit. Tall and lanky, she doesn't slouch to hide her height and doesn't apologize for her boyish figure. Or for anything. She's got at least 10 suits: pinstripes, white linen, black, gray, navy and others. She buys them from a guy who runs a shop on Entebbe Road, a major Kampala thoroughfare. He knows her build, and he knows what she likes.


These days, though, Onziema doesn't wear suits nearly as often as she used to. As one of a dozen or so publicly out Ugandan homosexuals, Onziema knows that even a trip to a local shop is risky. Wearing a suit can be a death wish.

(See a gay right's timeline.)
Last year, a member of Uganda's parliament, David Bahati, introduced a bill that, if it becomes law, will further criminalize homosexuality in Uganda. "Aggravated homosexuality," according to the bill, will become a capital offense. Anyone who doesn't report a known homosexual within 24 hours will be subject to punishment of up to seven years in jail.

No matter how many precautions homosexuals in Uganda take, it doesn't mean they'll be safe, says Onziema's partner, who did not want her name used for fear she will be persecuted. "When you're just walking, someone will turn and look, and have a second look, and a third, and a fourth." That's not surprising in a country where newspaper polls show 95% of people support the bill.

Onziema and her partner met playing rugby at a local Kampala club a couple of years ago. Onziema knew "within five seconds" that she had met the one, she says. It took her partner a bit longer. Onziema has known she's gay her whole life but her partner is not out publicly, and the process of coming to terms with who she is took a little longer.

Read the rest of the article here .

Posted by Integrity USA at 5:41 PM