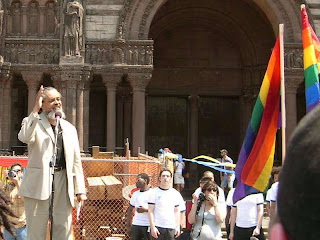 The Massachusetts state legislature has voted to repeal the 1913 law that prohibits gay and lesbian people from marrying in Massachusetts when it is illegal for them to do so in the states in which they reside.

The law was passed in 1913 as a response to interracial marriages that were legal in Massachusetts but illegal in most other states at that time. It was designed to ease legal tensions that might arise when interracial couples came to Massachusetts seeking marriage and then sought to have their marriages recognized in other states.

After the 2004 state Supreme Court ruling legalizing gay marriage, the law began to be used for the same purposes, but this time limiting the rights of same-sex couples.

Rep. Byron Rushing, a leader in The Episcopal Church, member of the House of Deputies, and Board Member of the Episcopal Women's Caucus, was instrumental in orchestrating the repeal.

Read the full coverage from Boston.com by clicking HERE
Posted by Jon M. Richardson at 6:52 AM