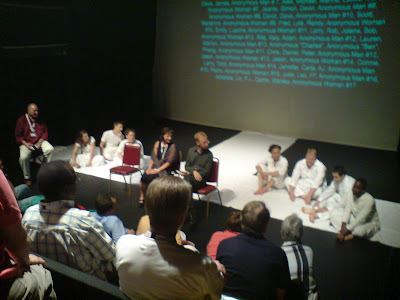 Last night the cast and crew of "Seven Passages" gave an amazing performance. The play consists entirely of words from the Bible and the real-life stories of over 100 gay and lesbian Christians living in Michigan. It explores 7 "clobber passages" of scripture that are used to condemn same-gender relationships and 7 "life passages" common to gay and lesbian Christians. Four members of the audience from the Global South walked out of the theatre about halfway thru the performance. After a standing ovation, the Very Rev. Dr. Rowan Smith of South Africa facilitated a conversation between the audience, the directors, and the cast.

"Seven Passages" will be performed again TONITE, July 31st, 8 pm, at the Aphra Studio [just to the right of the Lambeth Conference registration table in the Grimond Building]. If you are in Canterbury, don't miss it!

If you are not in Canterbury, a DVD of the play is due for release in September. To order an advance copy, please contact the Actor's Theatre at +1-616-234-3817 or kdutkiew@grcc.edu. You can also arrange a license to produce the stage version in your area.

This performance was made possible thru a grant from the Arcus Gay & Lesbian Fund.
Posted by Integrity USA at 2:52 AM

More on this and other Lambeth news from Integrity/Canada here.