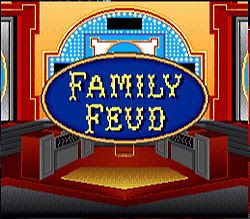 It struck me this morning that there are some who are eagerly awaiting the Lambeth Conference equivalent to that moment on the television game show "Family Feud" when the host would turn to the scoreboard and announce ... with great drama ...

And one family would win and go onto the bonus round and the other would slink off with a case of Rice-a-Roni amongst their consolation prizes.

But I'm thinking this morning that what made for a long running game show does NOT necessarily make for a life-giving communion of faith.

Here's the "survey" that prompted my Monday Morning Musings: Ruth Gledhill's report in today's TIMES that (a survey says) "Four in five protestants believe gay sex is a sin and that practising gays should not be ordained."

Goodness. Forgive me if I'm not shocked, surprised, horrified or otherwise convinced that what this "survey says" has any value for the work our bishops are about at this Lambeth Conference.

For one, I cannot help but imagine if such a survey was taken in 1950's Topeka, four in five residents would have believed that segregation was perfectly OK and that the Brown v. Board of Education decision to integrate public schools was in error.

For another, I do not remember "Blessed are you who have complied with the will of the majority to exclude the minority" in any of the Beatitudes.

The American Episcopal Church has never maintained that it holds anything other than a minority opinion on full inclusion of the LBGT baptized in the life and witness of the church.

If the point of the Lambeth Conference 2008 game show unfolding on the Kentian campus is to come up with a "And the survey says ..." moment on Lambeth 1.10 or +Gene Robinson or the blessing of same sex unions in order to send the Americans off with their case of Rice-a-Roni, then we might all have save ourselves a lot of time and our respective churches a lot of money and stayed home.

The focus of the work -- so far -- at Lambeth Conference has been on how we are going to work together into God's future in SPITE of our differences ... not how we're going to vote some members of the Body of Christ off the Anglican Island BECAUSE of them. (I'm mixing my game-show metaphors but I think you get my point.)

Finally, just for fun, we've done our own survey. It wasn't of 517 "Protestant Christians" like the ComRes survey in Gledhill's TIMES article ... it was of 21 random folks wandering about the streets of Cantebury.

And OUR "survey said" that three-in-four people-on-the-street did not believe being gay should be a bar to ordination AND a significant percentage believed the church would grow and benefit from being more inclusive.

So here's MY survey question for the day:

If the harvest is plentiful and the laborers are few, why is it that those who talk the loudest and jump up and down the most about evangelism are busier surveying those in the pews about who should be kept OUT of the church than they are getting out into the streets and taking to those who need to be gathered IN?

Posted by SUSAN RUSSELL at 9:12 AM

There are a couple problems with surveys
1) How is the question worded (to get the answer the asker wants)
2) Where the quesions were asked. If asked outside a baptist church, of course 4 of 5 would say it's a sin.
Surveys tell nothing about the responders but everything about the asker's motives.

This just in.... In the July 28, 1497 issue of the Seville TIMES, Ruth de Gledhill reports that 4 out of 5 Catholics responded "Yes" to the following question: "Should abominable heretics and Judaizers who refuse to repent their damnable heresies be burned at the stake?" She also reports that the 1 out of 5 Catholics who answered "No" are now being questioned by the Holy Inquisition.

In other news, 4 out of 5 late-eighteen-century members of the Church of England think William Wilberforce is a complete nutter for trying to abolish the slave trade ... after all, slavery is repeatedly affirmed by Holy Scripture, and the missionary value of the slave-trade is beyond dispute, as it brings thousands of dark heathens to the light of the Gospel!

As we all know, large majorities are always right!

Neither side should care much for the 'survey' technique - unless of course, the survey is of Scripture and there you'll find the requirements for a deacon and bishop plainly listed - husband of one wife ring a bell with anyone here?