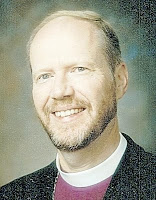 By Stephanie Innes
Arizona Daily Star
Tucson, Arizona Published: 07.11.2008
The bishop of Arizona's Episcopalians says it's "insulting" that an openly gay American bishop was not invited to next week's Lambeth Conference, a worldwide meeting of the Anglican Communion.
Arizona's Bishop Kirk S. Smith, a Phoenix resident, is one of about 700 bishops from around the globe who will attend the once-per-decade event, which will begin Tuesday in Canterbury, England. The Episcopal Church is part of the Anglican Communion, which has nearly 80 million worshippers around the world.
Bishop V. Gene Robinson, the openly gay bishop of New Hampshire, was not invited to attend. But Smith said Robinson will be in Canterbury, just not at the event.
"I think it's a very insulting thing to the American church that a duly elected bishop is told he's not allowed to come," said Smith, who will be attending his first Lambeth Conference.
"The vast majority of my colleagues feel quite upset. But Gene himself told us, 'You need to go and make your case.' He has been gracious and complied with the archbishop of Canterbury. I hope I will be able to convince some of the bishops I meet with to meet Gene, so that he's not just a name."
Read the rest at http://www.azstarnet.com/metro/247804.
Posted by Integrity USA at 8:07 AM