A Sermon for Our Times: Bishop Gene Robinson in the Face of Fear 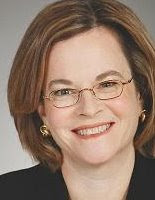 by the Rev. Debra Haffner
Posted July 15, 2008 06:00 PM (EST)
Watch this clip from the BBC.
Really. Stop now and watch it. It's less than two minutes. And it brought me to tears.
If you don't recognize the clergyman who is speaking, you have surely heard of him. He's the Right Rev. Gene Robinson, the ninth bishop of the diocese of New Hampshire and the first openly gay bishop in the Episcopal Church. This is the man who stands, as his recent memoir puts it, "in the eye of the storm" that has engulfed the global Anglican Communion since his consecration as bishop five years ago.
In the video clip, taken last Sunday, Bishop Robinson is preaching at St. Mary's Church, Putney, in south London. He was on his way to the Lambeth Conference, the once-a-decade meeting of Anglican bishops convened by the Archbishop of Canterbury, Rowan Williams. The conference opens on Wednesday (July 16).
Not that he will be allowed inside. To appease those who oppose the ordination of gay clergy and leaders, the Archbishop has excluded Bishop Robinson from attending. Bishop Robinson instead will stand on the margins, in an adjacent space called "the Marketplace," where products are sold and new ideas get a hearing. He intends to put a face on the controversy, a face of love in a climate of fear.
Click here to read the rest!
Posted by Integrity USA at 4:51 AM