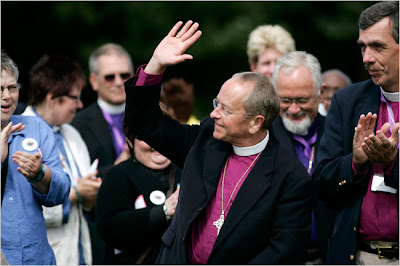 [+Gene Robinson acknowledging applause from the congregation at the greetings: Photo San Tang/AP]

A morning-after round up of news and blog coverage of yesterday's Eucharist organized by Changing Attitude and Integrity on the "fringe" of the Lambeth Conference.

New York Times: About 200 worshipers, including many of the American bishops who attended the earlier Eucharist at the cathedral, held a service before a roughly carpentered wooden cross, then lingered over a picnic. Bishop Robinson, surrounded by well-wishers, declined to give interviews, apparently keen to let only his presence speak. In a radio interview with the BBC last week, he said he had not come to England to disrupt the Lambeth Conference but rather to make the case for gay men and lesbians in the clergy in as civil a manner as possible.

The Guardian, reporting on the "inclusive nature" of the opening service at the cathedral in Canterbury also noted: This inclusivity did not extend to Robinson, who did not receive an official invitation. He spent the afternoon at an open-air communion and picnic, in the company of a gay and lesbian Christian lobby group from the US. (And for the record, the unnamed "female Bishop" pictured in the Guardian story is Mary Gray Reeves of El Camino Real.)

The Independent reported: A field in Canterbury saw the first appearance of Gene Robinson, the media-friendly openly gay bishop who has timed a visit to the city to coincide with the conference to which he was not invited. The controversial bishop was attending a gay and lesbian service outside St Stephen's Church near the university.

However, in a sign of the near-universal unity of the church at this stage, the event was not presided over by Bishop Robinson. Instead, Colin Coward, the head of Changing Attitude, and Susan Russell, president of Integrity, the equivalent group in the US, presided and preached.

And the Times included this note in the report on the official opening service: Bishop Robinson was not at the service, because he has not been invited to the conference. Instead, he attended an open air communion and picnic organised by the lesbian and gay Christian community at nearby St Stephen's. The US gay lobby group Integrity will this week launch a new video featuring real-life case studies of gay Africans telling their stories of why they had no choice over their sexuality but still consider themselves part of God's natural creation. (Love the Voices of Witness Africa plug!)

Episcopal Life was there, reporting: About 33 bishops, including Robinson, were part of the procession at a Eucharist in a nearby field within view of the cathedral towers that celebrated the gifts of lesbian, gay, bisexual and transgendered Anglicans. The Rev. Susan Russell, president of the gay-support group Integrity USA, said in her sermon that her listeners should "tell the truth about the very real gaps that exist among the experiences, world views and theologies of many members of the Anglican Communion."

Posted by SUSAN RUSSELL at 5:06 AM