For one brief tiny second, I think there was a rainbow over the green field where the Integrity/Changing Attitude Eucharist took place this afternoon before a crowd of 160 people, including 33 bishops. The Canterbury Cathedral loomed dramatically over the trees beyond the altar. 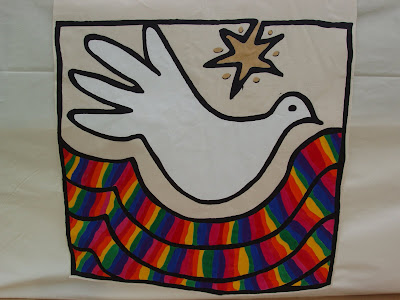 It was a cool blustery mostly sunny afternoon interrupted occasionally by brief light showers of rain. As the second shower was passing, the sun came out, creating a rainbow just as I glanced up. I grabbed my photographer’s arm, but it was gone before I could get words out.

Did I imagine it? Was it wishful thinking?

It seemed much too apt to be true, that tiny glimpse of color, so I’m assuming I imagined it. One often feels that way in the Anglican Communion – thinking one has glimpsed some hope only to find it was an illusion.

But this afternoon, there was one genuine icon of hope for LGBT folks, and that was Bishop Gene Robinson, striding across the road from St. Stephens encircled by a small group of bishops come to stand in solidarity with him at the service. 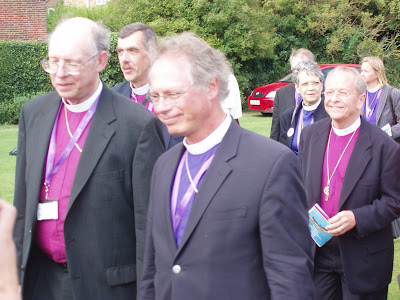 The irony is that at the very moment Bishop Robinson wasn’t feeling very hopeful himself. He had just learned that the house of bishops of the 38 “national” provinces are supposed to meet Tuesday evening and that “they” – the Lambeth Conference organizers – had decreed that Bp. Robinson was not to be allowed to attend the meeting of the US House of Bishops. It might make it appear that he is a participant in the conference, something “they” apparently want to avoid at all costs, lest it offend – who? The people who are boycotting Lambeth?

It was the very thing he had pleaded with his brothers and sisters not to allow to happen – that they not allow the “powers that be” to separate them.

So Bp. Robinson was grateful for the Eucharist, because, as he said, “Eucharist always helps.”

Integrity and Changing Attitude had joined forces to put on the service for the purpose of praying for the bishops at the Lambeth Conference. It was a startling sight – the groups that had been the most wounded by the actions of Lambeth 1998 were here praying for the success of the Lambeth Conference, while those who had most celebrated the outcome of the 1998 conference were boycotting it. 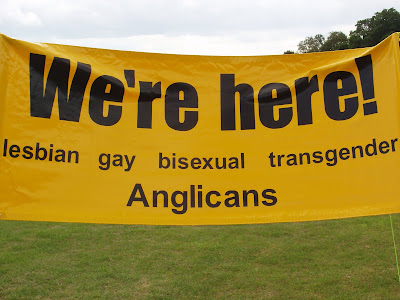 The service, presided over by Colin Coward of Changing Attitude, seemed to lighten the spirits of those present. While a Eucharist like this is fairly common at, say, a General Convention or even a diocesan convention in the U.S., it’s almost unheard of in England, where the leadership of the Church of England tries to pretend there are no such folk in their pews, and certainly not in their pulpits, behind their altars, or under their miters. The mind boggles, doesn’t it?

So the LGBT folk from England, Wales, Scotland, and Ireland who were present were mildly amazed to see an openly gay priest at the altar and hear a lesbian preach. 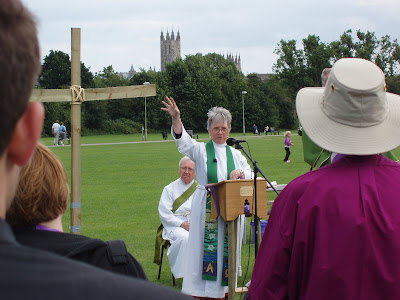 Susan Russell was at her best, preaching a sermon of God’s inclusive love that clearly touched the hearts of many of those sitting or standing on the grass in front of her.

She started out by talking about that ubiquitous warning of the London Underground, “Mind the Gap," the warning to passengers to be aware of the distance between the train and the platform.

“I can’t help but wonder if minding the gap isn’t one of the ways an island people cope with the challenges of gaps that don’t have anything to do with trains! It is a mindset that says `gaps happen and we mind them and keep moving along’ that is part of the DNA of not only the English people but of the English Church.

“It is the essence of an Anglican comprehensiveness that has – up until now – been able to hold together a world-wide communion in spite of the gaps between theologies and polities and languages and liturgies.

“As this Lambeth Conference begins, I’m wondering if `minding the gap’ might not be one of the most important things those of us who love, care about and pray for this Anglican Communion can do,” she said.

She reminded the listeners that Jesus promised that “the truth will set you free.”

“To mind the gap is to commit ourselves to tell the truth about the very real gaps that exist between the experiences, worldviews, and theologies of many members of the Anglican Communion. It is equally to speak the truth that the Gospel we share is stronger than the differences we acknowledge,” she said.

“The truth that will set us free is that Jesus spent a WHOLE lot less time talking about who was going to get to heaven than he did talking about bringing heaven to earth. `Thy kingdom come, thy will be done ON EARTH AS IT IS IN HEAVEN’ are arguably among the most familiar words in all of Christian faith – the words our Lord Jesus `taught us to pray.’

“So my wondering today – and we’ve happily got a great lot of bishops here who should be theologically trained enough to give us an answer -- is this: When did the litmus test for going to heaven become correctly guessing who else God has on the invitation list? “

“Jesus didn’t have a single word to say about guessing the guest list … or about doctrines or dogmas or creeds -- or even about Lambeth Conferences! In the gospel from Matthew we heard this morning he quite clearly tells us that it is not our job to fuss about the weeds – or what even to decide which ones are the weeds! Jesus will deal with that at harvest time, he assures us. And it is high time the church took him at his word and -- leaving what he’s asked us to leave to him to him – to get on with the work he has given US to do.

She pointed out that Jesus was VERY clear about what that work looks like -- “inasmuch as you did it unto the least of these.”

“The question Jesus asked was, `did you bring water to the thirsty, food to the hungry, clothing to the naked?’ … not `did you agree on liturgical practice, come to consensus on a biblical hermeneutic, unravel the mystery of human sexuality?’

She told her listeners that “our job is to tell the truth about the God who loved us enough to become one of us and then called us walk in love with God and with our neighbors. It is THAT truth that is core of the Gospel message of love and hope and inclusion and it is THAT truth that has the power to set the creation free. If we will claim it. If we will proclaim it. If we will get on with the work WE have been given to do.”

She then told Robert Fulgham’s story of the time he had to mind the children while the other grownups were off doing something else. He set the children to sorting themselves into giants, wizards and dwarfs, a game the purpose of which was mostly to run around and make noise.

Then, While the groups huddled in frenzied, whispered consultation, a tug came at my pants leg. A small child stands there looking up, and asks in a small, concerned voice, "Where do the Mermaids stand?"

Where do the Mermaids stand?

"There are no such thing as Mermaids."

She did not relate to being a Giant, a Wizard, or a Dwarf. She knew her category. Mermaid. And was not about to leave the game and go over and stand against the wall where a loser would stand. She intended to participate, wherever Mermaids fit into the scheme of things. Without giving up dignity or identity. She took it for granted that there was a place for Mermaids and that I would know just where.

Well, where DO the Mermaids stand? All the "Mermaids"--all those who are different, who do not fit the norm and who do not accept the available boxes and pigeonholes?

Answer that question and you can build a school, a nation, or a world on it.

What was my answer at the moment? Every once in a while I say the right thing. "The Mermaid stands right here by the King of the Sea!" says I.

So we stood there hand in hand, reviewing the troops of Wizards and Giants and Dwarfs as they roiled by in wild disarray.

It is not true, by the way, that Mermaids do not exist. I know at least one personally. I have held her hand.

Russell went on to say, “A question I have answered a hundred times is `why are you going to Lambeth Conference?’

“My answer this afternoon IS this afternoon. It is this extraordinary gathering of wizards and dwarfs and giants and mermaids – standing together as the Body of Christ – receiving together the bread and wine made holy – going out together to proclaim the Good News of God in Christ Jesus to the world.

“It is the church telling the truth that will set it free – the truth that it is not true that faithful gay and lesbian Anglicans do not exist … for we know some personally. We have held their hand.

“And it is the opportunity to witness to that truth that will set this church – this communion – indeed this creation – free of the fear of inclusion and open to the Holy Spirit of God calling it to move forward in faith into God’s future. And may the God who has given us the will to do these things give us the grace and power to accomplish them. Amen.”

The passing of the peace took a long time as the gathered crowd shook hands, hugged, laughed, and wiped tears away. Then they moved into the Great Thanksgiving with a gusto not often seen, ending with a hymn beginning “We sing a love that sets all people free.” 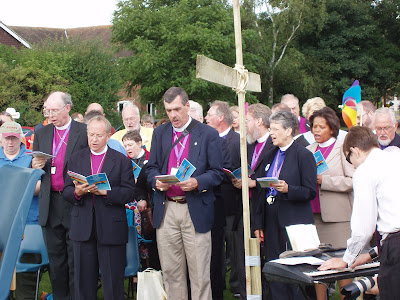 The sound of the singing blew across the field, over the boys playing football, the child toddling carefully over the grass, the woman throwing a ball for her happy dogs, the couple walking hand in hand, drifting past the cathedral and off into a waiting world.
Posted by Katie Sherrod at 12:58 PM