Dobson to be inducted into Radio Hall of Fame 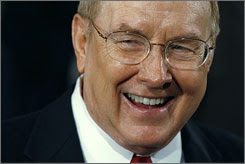 Truth Wins Out, a gay rights advocacy group, launched a campaign Thursday protesting the recent nomination of Focus on the Family founder and president James Dobson to the Radio Hall of Fame.

“It is outrageous and insulting that James Dobson would be nominated,” Wayne Besen, executive director of Truth Wins Out, said in a press release. While the Hall of Fame criteria for nominees does not address content or character, the LGBT advocacy group is demanding that Dobson’s name be removed from consideration because of homophobic and antigay comments made in articles, books, and on the air.

“I’m not surprised,” Besen said of Dobson’s nomination. Besen is, however, outraged: “[Dobson] is a very accomplished broadcaster, but I think it’s offset by the fact that he’s a very accomplished liar.” Truth Wins Out also maintains that Dobson has a history of distorting scientific research to defend his faith-based claims.

Here's the AP feed story on Dobson's nomination.
Posted by cp at 8:11 PM